As of 9/16/08 I am friends-locking my LJ. You can read my pubilc blog here if you wish. If you are not listed as a friend in my profile, comment to be added so you can see my entries. If I already have you added you have nothing to worry about. I might change to only partially friends-only in the future, but right now everything is locked down.

Today was absolutely beyond everything! I woke up at 5:30 (after going to sleep at 2:15ish) and got my stuff together to head to Orlando. I got there and

charming_goats and I went to Universal. I cried through the entire movie, fyi. The official plan was to go to Universal and ride a couple of rides, but instead we walked through the park and didn't want to wait more than ten minutes for any ride, so we just left and took the boat to the hotel where Leakycon and the ascendio meeting was taking place.

Since we had a few hours to kill, we decided to roam and see who we ran into. We saw Tara, who informed me I was in the Leakycon Yearbook. They took This picture and this picture from my flickr photo stream without credit. I don't mind all that much since it is pretty neat, but weird at the same time (also,

hp5freak made an appearance in there).

After roaming a bit, we decided to go to tchoup chop and start drinking. We each had a few drinks and then went back to the conference area.

kimberly_elf walked by and we got to talk for a bit. She saw I was in the book and offered to get Heather and I yearbooks. The time was not in our favor and we had to head out. I stopped as I saw

josee_madalia and we talked with her for a bit. I told her what Kimberly was doing and to tell her that we had to go to the meeting that we had come for, so she went to go get us the yearbooks. Rather than just the books, Kimberly was going to set us up with the whole awesome messenger and goody bag with potterific 3D glasses (pictured above). It was amazingly awesome and I cannot thank those two ladies enough!!

We hurried to the Ascendio meeting where we had some amazing margaritas (margaritas by the pitcher = love) and talked Potter and other geekly things. It was around 5:45 that I realized I was a bit drunk. Tara, Heather,and I decided to go to the Vendor's room to see if they had any awesome stuff; there wasn't much, so it was just a quick walk through the room. Tara had to go so we decided to sit and hang out. Some girl asked us where the nerdfighter gathering was and I had no clue. A second after she left I headed in the direction that she had gone and stepped I to one of the formal programming rooms where Hank Green was talking and performing. I stayed for about 40 or so minutes until it was kind of meh and filled with teen screaming. We headed out t a shuttle and after a battle with the rain, we made it to the car.

All in all it was a great day filled with random and awesome things. I think I am gonna find some dinner and attempt to sober up, lol.

Posted via LiveJournal app for iPad.

So, umm, Imma try and get back into using LJ. I miss it and everyone desperately. Every single day I feel guilty about not being caught up. Rather than try to go back, I'm just going to go forward and get back into the groove of things. I need to make time for this place again because it's important.

Posted via LiveJournal app for iPad.

This post is mainly about a crafty item I finished a few hours ago, but first I want to talk about soreness. As in, holy crap, I played Dance Central for at least 5 hours yesterday and now I'm sore as all hell. Of course, I'm really stupid, and the second I'm done posting this, I'll be going back to play again. Aaaaaanyway, I made a tiny top hat with this design from Urban Threads and it is adorable. I even went out of the house like this. :D 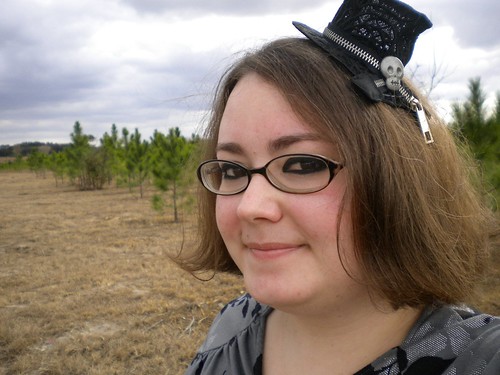 Yes, I'm a horrible person, but I do this every year

Thanks to everyone that sent me holiday cards this year! I feel like I forgot to put a couple up, so I think tomorrow I'll probably find a small stack of cards (so if yours isn't in this picture, I'm sorry!) 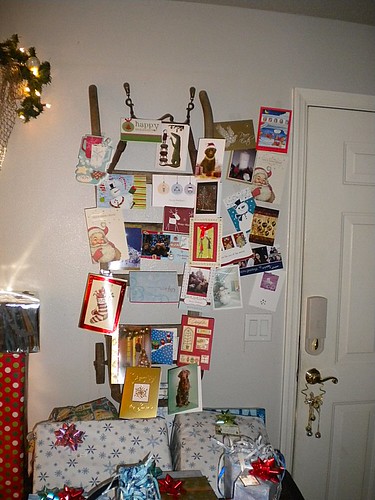 Yesterday my dad took my sister Laci on a drive to "get a gift for mom" and when they arrived she saw a lady walking a cute little boxer puppy and my dad told Laci, "Merry Christmas." Laci immediately started bawling (which made the lady selling the puppy bawl and that made my dad cry, too). Then when Laci got the puppy home, Josh started crying, too. And later, when I heard this story, I cried a bit too because I'm a sympathetic crier in the worst way. XD

And here's a video of him

So I just realized that I never posted recent cross stitch finishes to my LJ. I posted other places and showed them in my TTMT video (speaking of, if you want to watch them they are on my youtube channel), but didn't post here, mainly because my partner just received this weekend.

And in work related news - all is well. I'm just ignoring and moving on from everything (even though they opened our annual holiday luncheon with a prayer) because I am too busy to care right now. The luncheon we had was AWESOME. Our normal workday goes from 7am-6pm and I usually take my lunch from 12-1. Instead of the normal lunch, we got to close the office from 12-2!! I thought it was going to be boring, but it was fantastic. We had some food, played some games (including one of the most hilarious instances of musical chairs I have ever seen), and just chatted.

I really didn't feel like an outsider at all and that was nice. Of course, we paid the price for being out of the office for 2 hours and spent the rest of the day catching up and staying 30 minutes later than normal. Oh! And as a bonus to my already good day - the computer in the back of the office I scan documents with (not my normal one) has been upgraded! It is so fast now. If only our normal computers could be upgraded. We have the only 4 computers in the entire office that haven't been because our peripherals aren't compatible. :P